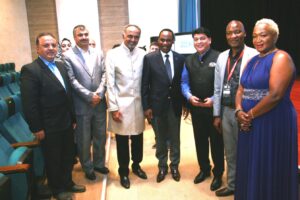 The Kenya International Sports Film Festival (KISFF) entered its third year with the successful hosting of the 2020 virtual edition with went live online from 29th October to 1st November.
The virtual festival was streamed on facebook, You Tube and the online conferencing tool Floor.bz with facebook going live on the entire duration of the festival.
The team at the iGabantu Studios together with the Kenya International Sports Film Festival staff led by the KISFF chairman and festival director Aasif Karim worked round the clock to ensure a world class festival which attracted a submission count of 1, 328 entries from around the world.
The dream of the festival was conceptualised after Karim saw the opportunity at film festivals in Asia and Europe.

In 2018, the Kenya International Sports Film Festival, the first and only sports film festival in Africa to date took place from Thursday 22nd November to Sunday 25th November at the National Museums of Kenya in Nairobi. At close of submissions, a total of 1323 films from all over the world had been submitted. The jurors were judging from 191 entries that made the initial selection.
All the submitted films were professionally judged by carefully selected independent judges who have a combined wealth of experience in the local and global film industry. The judges made their decisions according to various specifically assigned categories, and finalists awarded prizes.
KISFF hosted leading Kenyan sports personalities of international stature as well as film professionals and enthusiasts. The festival was officially opened by Chief Administrative Secretary at the Ministry of sports Hassan Noor Hassan. The red carpet awards gala was held at the Aspire centre. The panel discussions tackled a wide range of topics; from doping and drug use in sports to a professional sports person’s life and life after sports.

KISFF brand ambassadors for the first two years were athletics legends Rose Tata Muya and Douglas Wakiihuri.
In the second edition in 2019, the festival was held at the Signature Auditorium. The team, having gone through teething problems in the first edition was now ready to offer to the world a world class festival. Meticulously planned, the team hosted Kenya’s great sportsmen and women and had incisive discussions during the panel sessions with the football in Kenya and Cricket in Kenya panels setting the internet ablaze with interaction.
The guest of honour at the 2019 event was the Cabinet secretary, Ministry of ICT Hon Joe Mucheru who was represented at the closing ceremony by the Chief Executive Officer of the Kenya Film Classification Board Dr. Ezekiel Mutua and the Chief Executive Officer of the Kenya Film Commission Timothy Owase.

At the close of the four day program, the KISFF chairman broke the news that in yet another milestone achievement, KISFF had entered a memorandum of understanding with the global Federation Internationale Cinema Television Sportifs (FICTS) the ISFAF – International Sportfilm Festival Association in a partnership that will see FICTS assist, guide and support KISFF in all its activities to ensure further growth in Africa.
KISFF was selected for admission into FICTS in November 2019 after successful hosting its second edition after the inaugural KISFF event in 2018, and FICTS have agreed to work together to promote as both have similar vision and goals in promoting sports film and related areas.
In the two-year MOU with FICTS, a global organisation whose objectives are mainly to promote sports films and is recognised by International Olympic Committee, KISFF, that is organized by the Safinaz Foundation in Kenya, being the only sports film festival in Africa will benefit from the professional guidance of FICTS in ensuring international standards in technical and organization of the annual festival.
FICTS promotes the social and cultural meaning of the Olympic and Paralympic Games blending sport with culture as well as the ethichal, cultural and artistic function of the Sport Movement through television, Cinema and New Media in order to create a better knowledge of the sport world and of its moral values.

“KISFF will work, promote and support FICTS in all areas as required. FICTS and KISSF can mutually use the logos and related areas to promote each other mutually and KISFF will ensure the necessary platform during its festival to promote FICTS and IOC objectives.” Reads the MOU in part.
“FICTS will support whenever possible in kind and financial resources to KISFF as and when available. The MOU is valid with effect from 01/02/2020 for 2 years. Each party can give 3 months’ notice in writing to dissolve this agreement.” The agreement continues.
The agreement was signed between the President of FICTS Prof. Franco B. Ascani and KISFF chairman former Kenya international sports man Aasif Karim.

The arrangement contemplated shall in all respects be governed by and construed in accordance with the laws of Italy where FICTS is headquartered.
With this agreement, the 2020 edition of the Kenya International Sports Film Festival was held three weeks earlier from October 29th November 1st 2020 in line with the FICTS calendar which features 22 countries around the world. Uganda is the only other African country in the calendar.