The fourth edition of the annual Kenya International Sports Film Festival (KISFF) will be held from 28-31 October 2021. Submissions of films and documentaries opened on 15th May, 2021 and will be open for a period of three months on the film freeway global portal. This year, organizers of the festival the Safinaz Foundation anticipate a bigger event having emerged from the past three editions with a wealth of experience and global recognition. The sports film festival, which was inaugurated in 2018 and is the first in Africa, is the brainchild of Safinaz Foundation that is steered by former Kenyan international cricket and tennis national teams captain Aasif Karim. 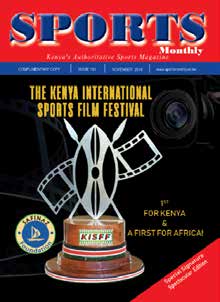 Following the success that the 2020 KISFF virtual event achieved, this year’s festival is as well destined to be held virtually. The 2020 virtual event commanded a 25,000 people audience online and organisers are looking at hosting another mega festival online. At the same time, the organising commitee is monitoring the coronavirus disease situation in Kenya with a view of hosting a physical event that will also be live-streamed across the globe. According to KISFF Chairman Aasif Karim, the just conluded KALASHA INTERNATIONAL FILM & TV MARKET, 2021 was an inspiration as the annual awards, organised by the Kenya Film Commission was also Virtual and had a special focus on animations. He indicated that he had interacted with various Animation Film Practitioners during this forum and that they were more than ready and willing to explore Animated Sports Films as a new frontier. Karim is also a member of the Board of Directors at the Commission.

In March 2020, KISFF formally entered a memorandum of understanding with the Federation Internationale Cinema Television Sportifs (FICTS) and successfully joined the “World FICTS Challenge” International Circuit Festivals which is part of the ISFAF – International Sportfilm Festival Association, an organisation that works to promote and develop initiatives aimed at improving the artistic quality and communicative effectiveness of international sports film festivals through mutual collaboration.

In recorgnition of the fast growth that KISFF has recorded, FICTS has accorded Karim entry pass to all FICTS festivals that will be held in 2021 across the world; this after the KISFF chairman had his documentary film, The Karims- A Sporting Dynasty win an HONORARY MENTION Award at the FICTS Grand Finale in Milan, Italy. Grappled with the global COVID-19 pandemic, the world is living in uncertainty and only beginning to understand the farreaching consequences of the coronavirus crisis around the world a situation which calls for creativity, determination and flexibility. 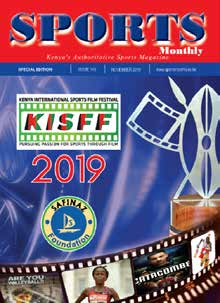 In 2020, 16 FICTS sanctioned International Festivals in five continents across the globe and 20 Festivals will be held in 2021 with the Final slated for Milan, Italy from 26 to 30 November. The third edition of the Kenya International Sports Film Festival which was held virtually in 2020 was instrumental in breaking the glass ceiling having received a total of 1,328 submissions even at the face of the global Covid-19 pandemic. The second edition of sports film festival, which was held from November 21 to 24, 2019 at the Siganature Auditorium in Nairobi’s Westlands surburb received a total of 1,244 submissions from 100 countries around the world, out of which 205 movies were short-listed.

In the inaugural festival in 2018 held at the Louse Leakey Auditorium at the Museums of Kenya, over 1300 sports movies/ documentaries were submitted out of it 191 were shortlisted and 23 selected for filming.

According to the calendar released by FICTS, Kenya International Film Festival has been listed the 16th of the series in the world challenge two already having being held; The BCN Sports Film – Barcelona International FICTS Festival in Barcelona Spain in January and Tehran International FICTS Festival in Iran in March. The Zlatibor International Sports FICTS Festival will be held Zlatibor Serbia from June 30 to July 3 rd. China will then host from August 8 to 12, the 18th Beijing International FICTS Festival organized by BODA – Beijing Olympic City Development Association in collaboration with FICTS in the framework of “Beijing International 10 Sports Film Week”. The topic of 2021 is “Winter Olympic Dream Sports Affection” to further promote Beijing as the next venue for the Winter Olympic and Paralympic Games 2022. The City of Nagano in Japan is scheduled to follow suit in August when they host two days of special events in August connected to the Olympic Games Tokyo 2020. Japan will host the Olympic games that were postponed last year after the unprecedented coronavirus pandemic spread through the world. Rio De Janeiro Brazil will follow suit with Cinefoot, the only football film Festival in Brazil and the first in Latin 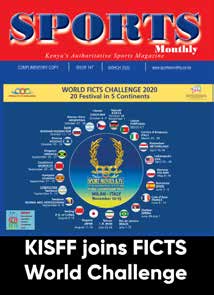 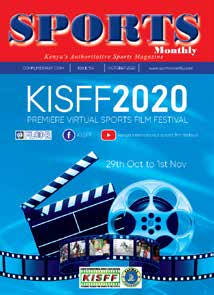 trains their eyes to Kenya for The Kenya International Sports FICTS Film Festival that is scheduled to be held in Nairobi from October 28 to 31. This is the only sports film festival in the African continent and is organised by the Safinaz foundation. Others are Cortina, Italy, The “Nice Côte d’Azur International FICTS Festival” in Nice France from October 29 – 31 and the 8th Sport Film Festival Rotterdam in Rotterdam Netherlands. The full program and the officially selected films will be announced on October 7, 2021and the Final of the “World FICTS Challenge 2021” will take place in Milan Italy from November 26 to 30, 2021. FICTS will contribute to the promotion of the Tokyo 2020, Beijing 2022, Paris 2024 and Milano-Cortina 2026 Olympic and Paralympic Games through several events during the Festival in Milan and during the Festivals of World FICTS Challenge. The partnership between KISFF and FICTS is designed to see FICTS assist, guide and support KISFF in all its activities to ensure further growth in Africa.