The Kenya International Sports Film Festival (KISFF) founder, former Kenya International Sportsman Aasif Karim has challenged the Kenyan Government to capitalise on the rich talent that Kenya sends to global events and seize the opportunity to document the lives of sportspersons. Karim, who played tennis and cricket for Kenya advises that as Kenya prepares to go for the Tokyo 2020 Olympics in July, plans should be put in place to have a film crew accompany team Kenya and document the behind the scenes intrigues which go with national teams on duty for the country. “This year, we have the Olympics which will be like no other due to the Covid-19 pandemic. Both the ministries of Sports Culture and Heritage and that of Information, Communication and ICT should ensure that we have a team that will accompany our Team Kenya to Tokyo and document their activity from the pitch and tracks to their behind the scenes activity. These are priceless recordings that we have often failed to capture while Kenya has produced many world beating sportsmen and women whose stories and lives have not been told to the world,” Karim told Sports Monthly in an interview. 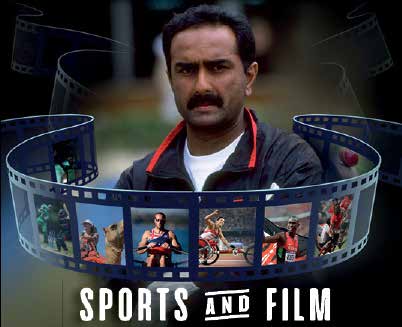 Karim, who is a board of directors’ member at the Kenya Film Commission was bitten by the documentary bug he recommends to other sportspersons in Kenya, nearly a decade ago when he commenced an ambitious project to produce a documentary, The Karims- A Sporting Dynasty, a film that retraces the lives of his family’s exploits in sports. The Documentary was in 2020 a recipient of an HONORARY MENTION Award at the FICTS Grand Finale in Milan, Italy. His father Yusuf Karim played tennis and was the champion for the coast open tennis championships for a cumulative 25 years. Aasif captained the national tennis team to the Davies cup in Egypt in 1988 before shooting high at cricket where he played at three ICC World Cups. At his last world cup in 2003, he played the infamous dream spell claiming the wickets of star Australian players.

Karim reminded Kenyan film makers and producers that one of the objectives of starting the Kenya International Sports Film Festival was to encourage documentaries and movies done on Kenyan sportsmen and women to have them compete at the festival alongside international films. “My idea was to encourage more producers to make films on Kenyan sports stars. The ministry of Sports and the Ministry of ICT should be at the frontline supporting this venture and this way Kenya will bequeath her future generations a great history that cannot be better told than in the way of film,” Karim said.

The inaugural Sports Film Festival, which was the first to be held in Africa, took place in November 2018 at the Louse Leakey Auditorium at the Museums of Kenya, over 1300 sports movies/documentaries were submitted out of it 191 were shortlisted and 23 selected for filming at the festival. It included 10 panel discussions on sports and over 25 top sports movies and documentaries from around the world were screened. In 2019, the second festival was held at the Signature Auditorium and once again the sports film festival screened about 35 top selected movies/documentaries from different parts of the world and again had 10 panel discussions on topical issues surrounding sports in Kenya and around the world. The festival received a total of 1,244 submissions from 100 countries around the world, out of which 205 movies were shortlisted.

The third edition of the Sports Film Festival was held amid the unprecedented Covid-19 pandemic. Due to the laid down containment measures that were put in place by the government restricting gatherings, the festival was done virtually. The festival received a total of 1,328 submissions.